Shown below is a photo of the controller PCB.  The two RJ45 connectors at the top left are the input and output connectors.  The RJ12 connector at the top right is used to program the microcontroller using the Microchip ICD in-circuit debugger/programmer.  The two position terminal at the top edge of the board is for 120 VAC.  There is one two position terminal block at the bottom of the board for each output.  I've provided links to the Microchip project file, the assembly code file, and the hex file below. 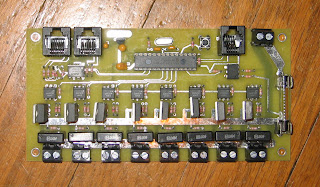 Several years ago I designed a Christmas light controller for a friend who does a large display every year.  He had been using a system based on cards that plugged into a PC (ISA bus).  The cards created digital outputs that were used to control triacs that switched power to the lights.  This allowed for only two states: on and off.  He wanted to be able to modulate the brightness of each output.
I selected the Renard protocol for several reasons.  It was an existing "standard" and there was no reason to create another.  More importantly, there was a plugin available for Vixen.  Vixen is the free PC based software used to control the sequencing of the lights.  Renard defines the data that is sent from the PC to the controller boards.
Each board was designed to allow independent control of eight outputs. Each output has 255 levels of dimming control from full on to off.  I should note that the board was designed for incandescent lights.  I have not tested it with LED lights.  Using only LED lights may prevent the dimming range from working as expected.  One work-around may be to always use at least one string of incandescent lights on each output.
The boards are daisy chained using eight conductor Ethernet cable.  Each board has two RJ45 connectors: one input from the previous board or PC, and one output to the next board.  Power is carried over six of the wires (12 VDC). The other two are a differential pair for RS485 style data transmission.  To simplify connection to the PC, the data input connector is designed to accept an RS232 serial port signal directly.
Links to the design files are below, along with links to Vixen software, Renard protocol, and ExpressPCB.

Blog created.
Posted by Circumflex at 13:48 No comments: